It seems to have been all go around here just lately - so much so that the stitching hasn't had much of a look in! The main reason for that is Little Miss. She's been unwell since last Sunday, cutting a bottom molar and having a horrible cough. The cough is persistent and still here a week later so we're off to the doctors with her tonight. It's waking her up bith during her daytime nap and her big sleep at night so no-one is getting much rest. I just hope they can give her something for it with her only being a little one...

The other major piece of news regarding Little Miss is that she started walking yesterday! :D We're on cloud nine at the moment as she is 17 months so seems to be at the later end of starting to walk. She took her first steps on the 21st October and now walked properly on the 31st. I guess it's watch out world from now on!

Hubby has started a new job today, which I think will benefit us all. It's still baking, but that's ALL he'll be doing - no more paperwork to bring home! We will get more time with him, especially as his earliest start will now be 4am instead of midnight so we'll have time together in the evenings. YAY! He's also started up his own blog and will hopefully put the first post on today (he's under "The ramblings of a grumpy old man" in my blog list. :D

As for me, I've been for an interview and trial day at a childcare centre and it looks like I'm going to be doing 4 days a week soon! I also got a call from a closer childcare centre so it seems I'm in demand at the moment ;)

I have done a little bit on Jack's sampler but it's not moving so fast as Megan's did. Purely because of the lack of time I've had to spend on it. I'm enjoying doing this one, so hopefully once we get Little Miss sorted out I will be able to make some headway with it. 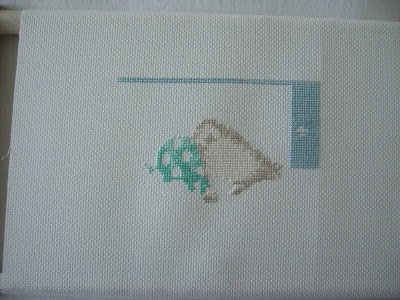 Posted by Stitchaholic at 12:41 PM