The drought is almost over

It seems my bug may have begun to creep back - yay! It's been a long while since I've even wanted to stitch, and I was beginning to wonder if I was ever going to get back into it. "What am I going to do with all that stash?" was one of the things going through my mind... I think part of me stopping was that I had had a long run of stitching all the time, which tends to happen - I'll stitch heaps and then nothing at all. But this time I think it was also partly triggered by a mistake with the stitching. I was sooo frustrated that I just couldn't bring myself to pick it up and look at it again. The mistake wasn't my fault either, so that made it even more frustrating. I found that when I changed to the second skein of blue for the border, there was a change in the colour. I had bought all the thread at my LNS, but a few months apart and I went back there to get some more, hoping that it would match what I had already done. Unfortunately it seemed I had bought a rogue thread the first time so there was no getting around the fact that I had to rip out an entire skein's worth of border :( That meant I went from this: 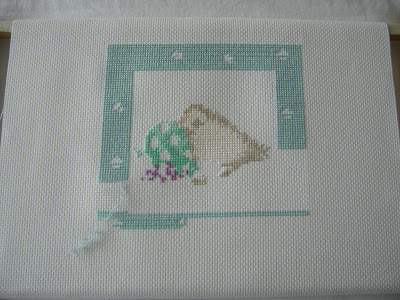 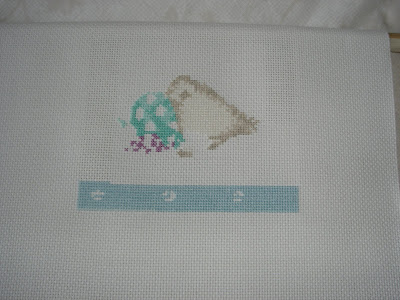 (The stitching along the bottom is in the new thread)

Last week, I asked hubby if there was anything he wanted me to do on my day off (we each have a day where Little Miss is at day care and we have time at home whilst the other is at work. I usually give hubby a list of jobs to keep him busy as I do housework on my day). He told me that I should do nothing and have a break for a change. Who am I to resist that? It was the day before my birthday (when I would be working) and I'd just had a week at home with Little Miss due to the extra long weeknd with public holidays everywhere... I love her to bits, but I just needed some time out :) So, what was I to do with my free time? I spent part of it on the computer (paying bills then getting distracted) and part of it watching tv, and then a thought crossed my mind - maybe I should get some stitching out! So that's what I did and got a few lines accomplished. :D That evening, hubby suggested I could do some more if I wished. I got him to move my daylight lamp from the lounge into the sitting area in the dining room and away I went for a little bit. The light is able to be closer to me there so it makes for better stitching, and that might give me more incentive to keep going with it. :)

So now here we are, and a week later I am still doing odd bits on my stitching and it is adding up to some visible progress! I think I might also be in danger of enjoying it again :P This picture was taken under my daylight lamp at night so the colours may appear different to the other pictures. 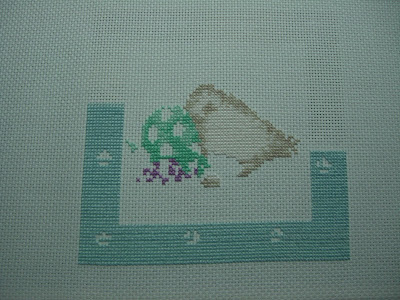 I must say I am pretty pleased with my progress now - the sides of the border definitely grow faster than the top/bottom. And now I'll try and get some more stitching done before I get too distracted on the computer!

I noticed that I have a couple of new followers too - I'd like to say welcome and thanks for popping by. Thanks also to everyone else for reading, even though it's been a while between posts. I'll try and get around to catching up with your postings soon :)