I've not really been very motivated to do any stitching for a while. I think the whole having-to-rip-half-my-work-out saga really put the kybosh on it for a while. That and a few issues at work and I really haven't been myself.

However, I have sorted things out at work now (to a point) and I finally got the motivation to pick up my stitching again at the weekend, when I had a stitchy meet with my lovely stitching friends (Belinda, Bek and Cassie). It was a fantastic few hours and as hubby was out watching the footie with his dad I had to take Little Miss with me. I was a bit dubious as to how it was going to go for a couple of reasons. Firstly, it was right on her normal sleep time, which meant she was either going to sleep in the car and get grumpy, or she was going to get grumpy due to not having a sleep. Neither of those things happened and I ended up putting her to bed almost an hour early that night and she was straight to sleep! It did make her a bit more tired the next day though so she's not quite ready to come out of her daytime sleep yet :) The second reason was that she's never been around my stitchy stuff before (I've always made sure it was away before she got up so she didn't get attracted to the scissors or needles. Again, I needn't have worried - there were far too many toys to play with at Cassie's place for her to worry about what we were all doing. It was a great afternoon with lovely company, good conversation and of course some stitching!

So now, this is how far I have managed to get with Jack's sampler. Besides the backstitch, the border is complete so I only have to work on the inside picture. Hopefully it won't take too long now as I feel like I have been working on this one forever. I already have my next project lined up too - Ouroborus. It's a design of a dragon, stitched in purple and I'm doing it as a stitchalong with Bek. We got it at the same time and a good friend of ours (who used to be in the stitchy group before she upped and left us to move to Germany) sent us some lovely sparkly material which was just perfect to stitch him on. I would love to get back to stitching on him but won't pick it up again until I have finished Jack's sampler (or it'll never get finished!) 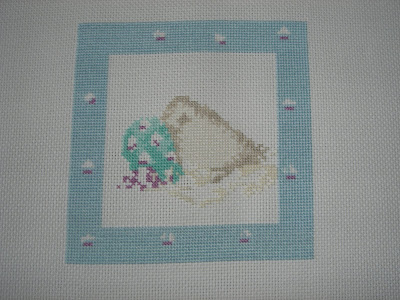 At our stitchy meet, we also floated the idea of going on a weekend away towards the middle of next year, as a kind of retreat. I'm pretty excited about the prospect and have already been looking on t'internet at places to stay. Three out of the four of us are mum's to young children (Little Miss is the oldest at just over 2 years) so we don't want to venture too far away in case we need to get back, but far enough to feel like we're having a complete break. There are a few places that look promising. It'll just be nice to get away from it all, have good company, lots of stitching time and hopefully lots of laughs. maybe even a stitchy shop or two!

I hope everyone else is going well with their stitching - I'm going to attempt some catching up on blog reading, but I may be some time!