A finish and a UFO

Well, it finally happened - I finished Jack's sampler! :D *happy dance* So here it is before the backstitch.... 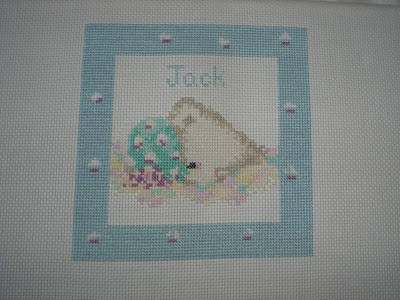 And after the backstitch... 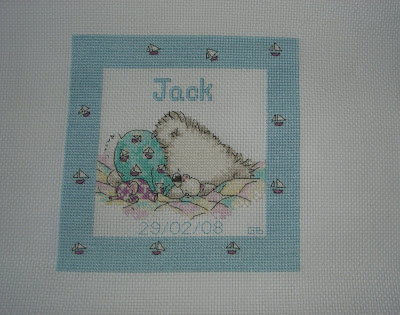 I finished it last month, after taking a humungous 11 months to stitch it. Considering Megan's took me only a month, I am pretty disappointed with that length of time. However, I am pleased with the end result. I'm very glad that I took out the border that would have been of a different colour as it would have spoilt the whole thing. I would've posted pictures earlier but I've been having issues with blogger :(

Anyway, I have now resumed stitching on a long forgotten UFO. My aim is to work through my UFO's one at a time until they are eliminated and then never have any ever again LOL

The piece I have picked up is called Birds of a Feather and is a design by Dimensions. Once finished it will look like this: 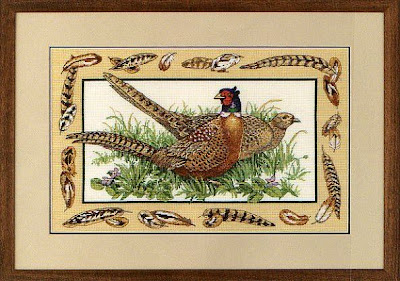 This is the last progress shot I have taken, but there has been more stitching since then ;-) 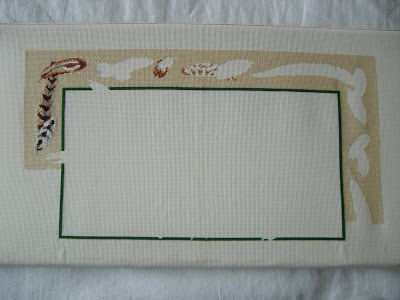 It is a design I am stitching for my dad, and he'll be visiting with my mum in February so I'm hoping to have it done or at least mostly done by the time they get here. Thankfully he doesn't know anything about it yet, as it was one Mum originally bought for him and was unable to stitch it herself. It's done on 18 count Aida and Mum's eyes weren't up to it (this was in the early days of her stitching, before she got her magnifier light. I agreed to stitch it in her place but I started it 8 years ago! It's just been one of those projects that has been put to one side to get other things done first and then I completely forgot about it... Oh well, it's back now and I'm quite enjoying working on it. The cream part of the border is only half stitch so it's coming along quite easily. I did get a little bored by the border though so I have started working on the central design. Gotta vary it up a little :-D This design is also one that I am timing. I am using a stopwatch, but I am not seeing how fast I can stitch (evidently, as it's been 8 years!). Some designs I just like to see how much actual stitching time goes into it. I have a tendency to sometimes have the tv on whilst I am stitching and pay more attention to the tv so a possible 2 hour stitching session might only have about 30 minutes of actual stitching in it. I am simply starting the clock when I begin stitching and stopping it for loo breaks or when I make a cuppa, and then keeping a log of it. I don't do this for every design, mind you as it would completely take the enjoyment out of it. I'll let you know what the final tally is - I think it'll shock me more than anything :-P

In other news, I have changed jobs and moved to a childcare centre a little closer to home. I'm really enjoying it, and an added bonus is that I now get an hour for my lunch break instead of half an hour. It makes it a longer day but it also gives me the opportunity to do somethign with that time. I was contemplating taking some stitching with me but instead I decided to use the time to read and leave my stitching until the evenings when I am at home. I have begun re-reading the Elm Creek novels by Jennifer Chiaverini. They are an easy read, and I just pretend that I am reading about a group of cross-stitchers rather than a group of quilters. I do the same thing with Kate Jacobs' knitting books. I seem to get such a sense of belonging within their groups that I almost feel like I am part of the book. It also makes me feel even more lucky to have the group of stitchy friends that I do.

Anyway, better wrap it up for one night, Little Miss has gone off for the first time ever (at home with me, at least) without her dummy so I'm going to make the most of it. Before I go though, I'd like to welcome my newest followers - I'm now up to the dizzy heights of 20! I hope I haven't bored any of you too much and thanks for reading my little blog. I'll try to keep it a little more updated so you actually have something to follow :D