I am very pleased that this week my husband picked up his stitching again! Woohoo! Admittedly, it was after a bit of teasing from myself and my stitchy friend Belinda (maybe even her hubby Adrian too) but I'm sure that doesn't matter, the point is that he started again. It has been a couple of years since he's stitched, probably. It's been so long that neither of us can remember. I got him hooked into cross stitch shortly after we got married - cunning plan! He had asked me to stitch an Egyptian design for him that he liked, and I agreed to. It was quite a complicated design (and still hasn't been done to this day...) Then he saw another couple of much simpler Egyptian designs so got them for me to do. One day I was stitching on another piece and we were discussing what I was going to stitch next. The Egyptian designs got mentioned and I jokingly told him that seeing as they were for him, he should be the one stitching them. To my surprise, he agreed! We decided it was best for him to start on a small design first to see if he liked it, and so we ordered a Snoopy design from Sew and So. Once he had begun stitching it, the bug took hold. He told me he now understood how I can sit and stitch all day and not realise how much time has passed. That, as they say, is history and was the beginning of his addiction.

Unfortunately, after a couple of years of doing really well at it, he developed carpal tunnel syndrome which made it very difficult to stitch. He had an operation on one wrist but it wasn't terribly successful. I think now he has come to live with it, and wants to try and do as much as he can, when his wrists allow. Work has also got in the way over the past couple of years, with promotion meaning that he hasn't had the time to do any stitching as he has had paperwork to do at home, and then been too tired to do anything else.

There was also a disaster with one of his kits, which had been left out for a while without being done, and the sun had got to it. It was black fabric, so ended up going a shade of red down one side. I think he learnt a painful lesson there, and it put him off stitching for a while. It was a stunning tiger design too. But, after some careful cajoling here and there, he's back into it! He decided that the only way he was going to get back into it was by starting a new design. So he went through his box of stash (one of my rules when he started stitching was that he was going to keep his hands off MY stash!) and decided on a design called Fish Quay by Derwentwater Designs.

This is how far he has got after 2 days (probably only a couple of hours worth) of stitching. 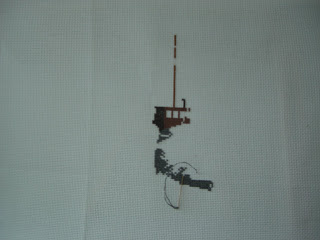 Posted by Stitchaholic at 7:56 PM