Well, in the end, it didn't take me all that long to decide what I would be stitching next. I have decided on my very first Prairie Schooler design that reads "A stitch in time". I thought it would be perfect to head up my blog. It's stitched on 32 count, and I completely forgot how small that is! I'm not having as much trouble with it as I initially thought I would though. The last time I worked on 32 count was 13 years ago, and my eyes were a touch better then!

I told myself that I was going to get everything organised last night to be able to start stitching today. It was quite late when I got off the phone to my mum, so intended to head to bed once I had done that. Well, it turns out that there were other ideas afoot... I had everything ready - threads sorted, material cut, centre found... And then as I was about to put it away, a little voice entered my head - "just a stitch or two to start won't hurt, will it?". I gave it some thought (for about a millisecond or two!) and thought that if I did a couple of stitches I could go to bed content in the knowledge that I had at least made a start. But we all know that I didn't stop at a couple of stitches, don't we? LOL I was still up stitching when hubby got up to go to work, at about 10.45pm, and only put it away at about 11.30pm.... Silly me! I've been tired all day because of that, but here's what I managed to get done: 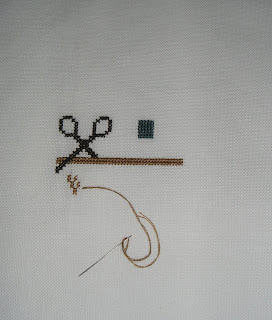 Posted by Stitchaholic at 10:02 PM